The Poison Thorn revolves around the narratives of three rape survivors of Liberation War of Bangladesh and witnesses the expressions of a collective trauma of war and its effects on women..

The Poison Thorn revolves around the narratives of three rape survivors of Liberation War on 1971 of Bangladesh.

Their voices have been resurrected from the agony of silence. This film As the pain and `stigma' of rape kept haunting them long after liberation, they felt that even though the war had ended, another one had begun in their personal lives. Women who fought and survived rape are still struggling to gain a respectable existence in society.

They are Birangonas--War heroines-- yet they have to fight everyday for social approval. Ranjita Mandal blames patriarchy; Halima Khatun accuses the state, Rama Choudhury negates the idea of violence.

They speak to break a silence after long forty three years and through their voices a new part of our history and identity comes into light.

"I made this film from a deep sense of discomfort.

In early 2011, I had joined filmmaker Rubaiyat Hossain’s research on birangonas and while working on the project I discovered that in everything official – government documents, news, cinemas, photographs, essays – whatever the medium, all post-1971 representations portrayed birangonas in the same manner: dead or half-dead, distraught, as mostly beggars." 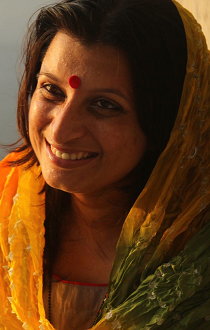 The poison Thorn is Farzana Boby’s first documentary film. She has worked as an assistant director, co-director and a cinematographer with many eminent directors in Bangladesh. Boby is also a poet and a writer and the founding member of Chobir Lorai, a non-profit organization of activist filmmakers.

This is a history of women, history of silence. We need to look back towards that muted history...