“Under Construction is delicate, dynamic, in less than 90 minutes perfectly balances every branch of its tale, highlights the line between reality and unreality with never annoying quick stereotypes, always bound to their director’s vision. Her touch is everywhere and the film is suitable for multiple views, maybe enough to see the sky of Dacca stripped of its long cranes.”

Under Construction is about a middle class Muslim woman struggling to find herself in the sprawl of urban Bangladesh. Theatre actress Roya suffers from her husband’s wish for children and traditional life. Not interested in motherhood, she decides to reconstruct a famous and politically minded play for modern times, reclaiming her identity, her freedom and her sexuality in the process.

Roya, a modern middle-class Muslim woman struggles to find herself in the sprawl of urban Bangladesh. After being replaced by a younger actor for the character of ‘Nandini’—the epitome of Bengali womanhood, the central character of Rabindranath Tagore’s political play ‘Red Oleanders;’ she delves into a psychological journey and battles to reconstruct ‘Nandini,’ reclaiming her identity and sexuality in the process. As she sets the play in a modern day ready-made garment factories in Dhaka; her journey to establish her individuality as a middle class woman is juxtaposed with the journey of her teenage housemaid Moyna, who later joins the industrial workforce. 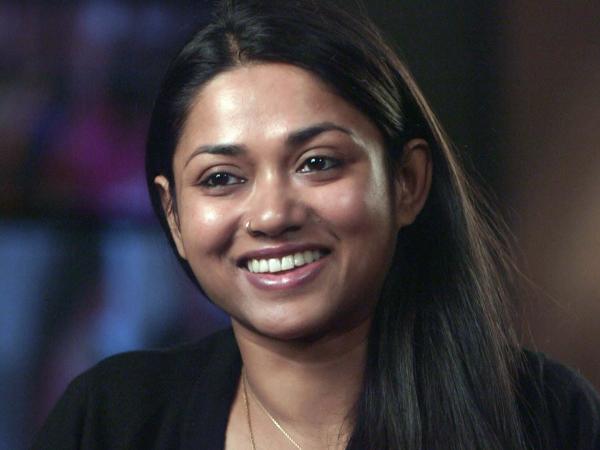 The film revolves around the theater actress Roya’s journey in trying to reinterpret The Red Oleanders. She challenges the representation of the woman in the play and wants to make her contemporary ... read more She situates the play in a modern day ready made garment factory. The workers have no name but numbers, they all work for a king who they never see. Tagore wrote this play as a critic of industrial civilization. The protagonist of my film at once demonstrates the political relevance of Tagore’s work in the modern day context of sweatshop labor, but she also questions Tagore’s representation of the woman as limiting and sets to free her from the cultural iconification.
I find Tagore's vision of modern day capitalism very apt and contemporary even though the play was published in 1926. When I look at Dhaka city, the working class population, may they be the rickshaw-pullers or ready made garment factory workers--I can see Tagore's vision of Jokkhopuri reflected--where each person is defined by a number and profit weighs heavier than human lives.
The modern Bangladeshi Muslim woman has not yet come into her full from having claimed her agency and subjectivity. She is very much still in the making. Dhaka as a city is going from the rural to urban, it is in transition, visually one won't find a single road in Dhaka where a building is not being constructed. As the city is literally and figuratively under construction so are its citizen, especially the women living there.
Also, in juxtaposing Roya and Moyna (the house maid) I have tried to demonstrate that 'woman' is also not a homogenous groups. The journey into emancipation might be very different for women belonging to different social classes and realities.